Mental Health. When the research-innovation chain works and turns into a success story

Bringing innovation into production, researching and experimenting are among the objectives of TrentinoSalute4.0. And when this happens it becomes a story to tell. This is the case of a Danish start-up, Monsenso, which has brought to the market a digital health solution tested in Trentino and which helps people with stress and depression to better manage their mental health. The system has also proved useful in this time of isolation to get people whose mental health was affected by COVID-19 back to work faster.

A success story that originated thanks to the NYMPHA-MD European project, completed in 2017, coordinated by FBK researcher Oscar Mayora, and which had among the EU clients the Autonomous Province of Trento, the psychiatric hospital of the REGIONH Danish capital region (Copenhagen) and the CSPT University Hospital of Barcelona.

Online and face-to-face assistance will now coexist and integrate more and more. We have all learned to use portable tools to keep our health in check. We have embraced them and now they are vital for everyday life, especially for those suffering from a chronic disease. Partly boosted by the impact of the Covid19 pandemic in this past year, and by the experiments carried out in recent years in the Province of Trento within the NYMPHA-MD project, now many people can count on a tool that can help doctors treat mental disorders, stress, depression and bipolar disorders.

How does it work?

The mHealth (“mobile health”) solution developed by the Danish company Monsenso consists of a smartphone app and a wearable device for patients, another smartphone app for their caregivers and a web portal for doctors. The system encourages patients to commit to self-care by providing physicians with a remote monitoring tool that helps them make clinical decisions, and can also help caregivers play a more active role in treating the person they care for. The system collects parameters, such as physical exercise, hours of sleep, alcoholic beverage intake, which are analyzed and correlated with the patient’s mental health, and shares them in real time with the doctor. Mobile connection allows healthcare professionals to quantify the onset of stressful, depressive or manic episodes linked to mood changes through objective parameters, to act in time and to track the behavior patterns of a patient suffering from stress, depression or mania.

How did all this come about?

“There were two European projects that pioneered the research of digital apps for mental health: MONARCA – MONitoring, treAtment and pRediCtion of bipolAr Disorder Episodes (between 2010 and 2013) and the Next Generation Mobile Platforms for HeAlth in Mental Disorders (NYMPHA-MD) project, between 2014 and 2017”- answers coordinator and FBK researcher Oscar Mayora, now head of the Digital Health Lab at Fondazione Bruno Kessler.

“NYMPHA-MD, in particular, was tested in some hospitals in Italy, Denmark and Spain and, based on the positive results obtained from the trials, Monsenso later developed its own product.NYMPHA-MD aimed to improve mental health treatment for patients with bipolar disorder”- adds Mayora. “The working group included the Autonomous Province of Trento, the Copenhagen Mental Health Services and the CSPT University Hospital in Barcelona. Wearable devices were used during the study, which showed that using a simple and scalable product, such as a smartwatch or smartphone, can help provide better care, at a lower cost, through a data-driven intelligent system, accelerating diagnosis, prevention and treatment “. 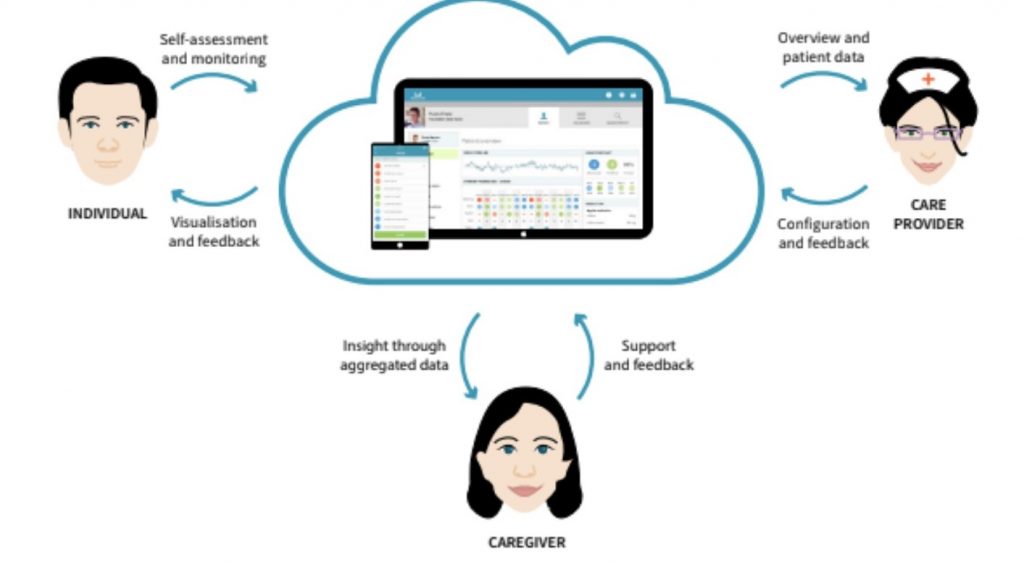 After the investigation stages, the results attracted the attention of customers from different sectors, public authorities, private providers and insurance companies that adopted the solution, not only for the treatment of bipolar disorder, but also for people with anxiety and schizophrenia. Since then, Monsenso has partnered with various other public authorities, companies and mental health institutions in Europe, the United States and Australia to implement the solution that encompasses a wider range of mental health problems, such as the treatment of alcohol and drug abuse.

From the NYMPHA-MD project, Monsenso’s business has grown rapidly, increased its revenues, doubled its workforce, obtained a very successful IPO (Initial Public Offering) on “First North Copenhagen” NASDAQ and struck a deal with a major pharmaceutical company that will use the solution in nine European countries. Recently, the company started deploying its solution to the Municipalities of Denmark to aid in their effort to reduce unemployment rates due to COVID-19 and help people living with stress and depression get back to work more quickly.

What has been done in Trentino?
FBK researcher Oscar Mayora, head of the Digital Health Lab (Digital Health and Wellbeing Center), coordinated the MONARCA and NYMPHA-MD projects. The MONARCA project involved Create-Net (Center of REsearch And Telecommunication Experimentations for NETworked communities, a research center later absorbed by FBK). In addition to Create-Net, NYMPHA-MD had among its partners the Trento Province Government (PAT) as its Main Procurer and the Psychiatry Unit at the Santa Chiara hospital in Trento, at the time directed by Dr. Renzo De Stefani (now retired).